This is a follow-up to “Netiquette on LinkedIn.” In the spirit of cooperative intelligence, I will illustrate how to be cooperative by sharing examples of bad Twitter communication practices that alienate Twitter followers.

1. Advertise your blog posts and everything about your business with every Tweet. It’s OK to send a person to your blogs as you publish, but it is tacky to repeat and/or re-tweet (repeat your Tweets) about your business continuously. I like the 80:20 rule–80% of my Tweets are about others; 20% about me.

2. Don’t share anything about yourself in your profile. That’s a way to discourage people from following you. People are curious about who you are: tell them and be human about it. I include a link to my LinkedIn profile, and got that idea by looking at a colleague’s profile.

3. Don’t have a picture or brand by your name. That’s an opportunity lost for branding. It’s so much more interesting to see someone’s picture next to their Tweet rather than the ugly, brown default space.

4. Don’t use your Tweets as a chat room. Some people are really just Tweeting to each other. Send that person a direct Tweet. The rest of us feel left out and don’t want to be a part of your personal conversation.

5. Don’t publicly berate anyone in your Tweets. Remember your manners.

6. Twitter is not a megaphone for one way communication. Engage your followers by sharing information you think they will appreciate and ask them questions.

7. Set up a robot to send a standard message thanking people for following you on Twitter. I find this insulting. I would rather get no message than a robotic one.

8. Mass following everyone so you can inflate your numbers, and then use that success metric for influence. Some people will “Brag Tweet” that they just got over 100 followers in a 24 hour period. We followers don’t care! Think about how this makes your followers feel–not very special.

9. Some people argue that you should automatically follow everyone who follows you on Twitter. I think it depends on your goals. I am not in Twitter for the numbers game. I would like to get to know the people who follow me, gradually. For example I am not a huge sports fan or into pumping iron, but somehow I am being followed by these types. BTW, Tweet Deck lets you organize those who follow you in categories that you create. For example, I create separate columns for Tweets from my personal friends, my research and competitive intelligence colleagues, friends in Colorado, and frequent Tweeters. Lately I prefer Hootsuite, but was disappointed when LinkedIn no longer allowed us to post on LinkedIn groups—just to our LinkedIn individual or LinkedIn business accounts.

10. Some people Tweet so often that they fill up their followers’ screens with their Tweets. It’s obvious they’re using software, such as Tweetdeck, Buffer or Hootsuite  to stream out Tweets 24/7. I’m not knocking the use of technology: just don’t use it to abuse us! I think it’s better to send out occasional Tweets that are relevant to your social networking goals and the brand you are portraying. For example, I mostly report on competitive intelligence, market opportunity analysis, win/loss analysis, elicitation, and cooperative intelligence’s traits of leadership, connection and communication.

11. Some people Tweet the mundane details about their life which we really don’t care about like, “I just baked a loaf of bread. I’m waiting for my flight at Denver airport.” This is boring! Is this how you want to be remembered?

12. There are some people who have 1000’s of followers, but who follow no one. This is rude and insinuates that you are a taker. The only exception to this rule might be news stations like CNN, but even they want to follow a certain number of people to stay up with the news.

13. Some people just Tweet a link and don’t tell us why we should want to visit it. This takes very little time to include. It’s a real turnoff just to provide a link and makes people think you’re lazy.

So what do you find aggravating about practices on Twitter?

Check out The Dark Side of Twitter: What Businesses Need to Know.

In closing, when communicating on social networks, as with in-person networking you have to decide what works best for you based on your objectives for social networking, your ethics and philosophy. Recognize that everyone you connect with has their own standards which might be different from yours. It takes time to build a successful social networking presence just like it does the old fashioned way through meetings and phone calls. Relationships take time to develop, and the best way to nourish them is through continual, consistent communication, asking questions and listening.

Join our mailing list and get our cheat sheets on “How to Build a World Class Win/Loss Program.”

Ellen Naylor is one of America’s pioneers in competitive intelligence (CI) and Win/Loss analysis.For over 20 years, her research has consistently helped companies beat the competition and make smarter strategic decisions. Click here for our free Win/Loss cheat sheets: http://ellennaylor.com/subscribe/ 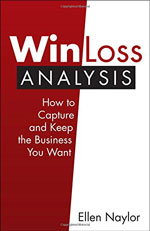