This post continues my story from the BCG Matrix Share discussion where we set the stage for an acquisition with a share of market visual.  This was a great start since it put everyone in the same knowledge place.  However, share of market by itself was not compelling enough for management to make its decision about acquiring Northern Telecom’s (Nortel) installed PBX base in Bell Atlantic’s (Verizon) territory.

Management needed some more proof.  One key executive was keen on acquiring ROLM since he thought they were more technically advanced than Northern Telecom, and that the government would favor this solution since they had many ROLM PBX systems installed.  The government is one of Verizon’s major customers since their territory includes the Washington, DC metro area. The market leader, AT&T (now Avaya) was not for sale, but it was essential to include them as the yardstick for the “big 3” PBX manufacturers.

To improve our analysis, we used sales intelligence by consulting with our sales force and a consultant who specialized in PBX RFPs (request for proposals).  We decided to posture a company analysis comparison based on key customer buying criteria, and decided it would be more credible if we represented the comparisons from a customer’s point of view, casting aside our blind spots and biases.  It would also be more pallitable for the ROLM supporter if we presented from the customer’s point of view, not our own. 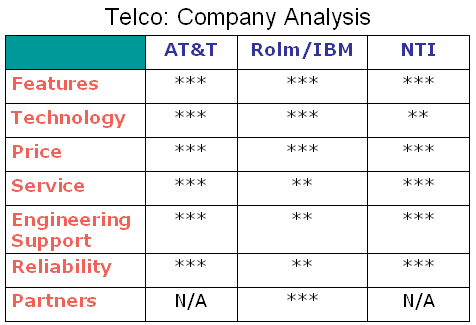 We agreed on 7 key reasons why customers buy PBX systems: features, technology, price, service, engineering support, reliability, and partners.  All 3 manufacturers were at parity in price and features.  AT&T had the strongest ratings overall in all 7 areas.  ROLM rated higher than Northern Telecom in technology, which supported the key dissenter’s view.  Meanwhile, Northern’s service, engineering support and reliability were stronger than ROLM’s.

At that time IBM owned ROLM, which was perceived by our ROLM supporter as a key strength.  We acknowledged that in this company comparison in the word, Partner.  However, we acknowledged that were we to acquire ROLM, then IBM would be out of the picture in our territory, so this would not be the strong advantage he had envisioned.  Also PBX customers didn’t value the IBM name as their strong brand ID was more in computers and data communication.

This is an example of how using tactical competitive intelligence swayed executives to make the right strategic decision.  We brought in the voice of the customer and the reasons why they buy, very simply, and it engaged our executives.

In our next post, I will show the modification to this feature analysis that further swayed the board to acquire Northern Telecom’s installed base of PBXs in our region.

How have you used tactical competitive intelligence to influence strategic decisions?