The Radar Screen competitor map is one of my favorite competitive intelligence tools.  It is totally visual, and fits on one page for easy digestion. It can be used both strategically and tactically, and is a rich communication tool. I first read about it in Adrian Slywotzky’s Value Migration: How to Think Several Moves Ahead of the Competition in the 1990’s.

It’s a great way to visualize how competitors are positioned relative to your company and each other. The Retail Radar Screen example below shows competitors relative to Macy’s, the large retail store which offers a broad spectrum of products including clothing, housewares, bed & bath, jewelry, shoes, cosmetics, fine china, handbags, and various accessories. It could be argued that Sears and JC Penney are Macy’s most direct competitors, as they offer a broad spectrum of similar products in their stores. Thus they are placed in the middle of the radar screen to show their relative position as a more direct competitor to Macy’s. Wal-mart and Target might fit in the next tier as they both sell clothing and housewares, but also sell food and sporting goods where they don’t compete. Outliers include Costco and Sam’s Club as they compete across some products such as clothing and housewares, but don’t offer the depth in either area, and sell food where Macy’s scarcely competes, and offer other products that Macy’s doesn’t such as computers and automotive. 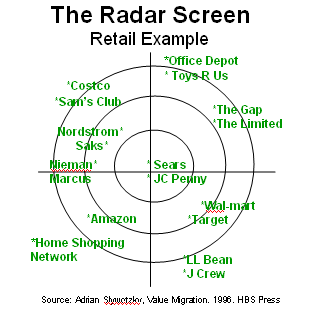 Ideally you would have a cross-functional team create a Radar Screen competitor snapshot. There is rich discussion about where and why competitors should be placed which is valuable to capture.  Some companies use the Radar Screen as the home page for their company’s competitive intelligence Intranet. They will re-position the competitors based on the news, and visually depict changes with a different color, for example. If you would click on each competitor, there would be the relevant news and a competitor profile explaining its positioning.

Radar Screen: Be Rewarded for Your Creativity

Be creative: the uses for the Radar Screen competitor map are as rich as your imagination. The screen can be divided into 4 quadrants which might depict competitors by 4 separate business units, 4 different geographies, and on a tactical level 4 different reasons why customers buy.

I have used the Radar Screen with companies who claim they have 20 major competitors in one business unit. This exercise achieves more focus, and we will often narrow that list to 6 – 8 competitors after rigorous discussion.

How do you use Radar Screen competitor maps?  I would love to hear from you.

Join our mailing list and get our cheat sheets on “How to Build a World Class Win/Loss Program.”

1 thought on “Visualize Your Competitors on a Radar Screen Competitor Map, a Great Competitive Intelligence Tool”