Last week I attended AIIP’s annual conference in Indianapolis, IN. I learned so much about running a small business better!

I gave a talk on competitive intelligence, and how information professionals can make a decent living by adding this skill to their research toolkit. Many are good at the collection and organization of findings. However, one area that folks seemed less familiar with was analytic tools, which allow you to communicate findings more persuasively if you use the right tool. In an earlier post, I described the Boston Consulting Group’s (BCG) Matrix model  and how I used this to set the marketing stage for an acquisition some years ago.

Another great analytic tool is personality profiling. Most often companies study their competitor’s management team or key employees such as the head of R&D. Usually their strengths and weaknesses follow them from job to job. It’s good to understand their predisposition; what mistakes they have made in the past; and what blind spots they might have. You can obtain the intelligence to develop personality profiles easily enough for executives in publicly held companies since you have plenty of sources such as speeches made to various audiences such as industry conferences and the financial community. It can be trickier to find information for executives running privately held companies. I find that local sources are the best, such as local newspapers and magazines, the chamber of commerce, economic development offices and perhaps their schools. In some cases you will get lucky and locate a chatty employee or ex-employee through a social network such as LinkedIn, Twitter, an industry Ning, forum or association.

Don’t just focus on their professional experience as their personal life is just as important, and often highly influences their professional decision-making. Sometimes you get great intelligence through an executive’s favorite charitable cause or hobby. The non-profit that they make donations to probably has some information on this executive, since they will need this information to pitch their cause to him or her. 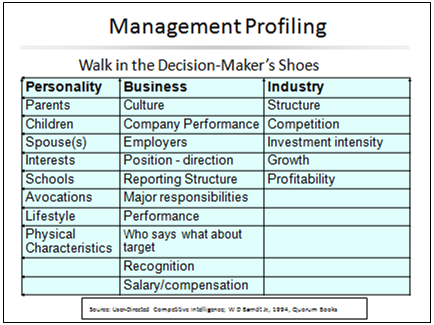 For those who want to read some books on analytical tools, I have listed three favorites here. Just recently, another analytical book, Analyst’s Cookbook, Volume 2 was published by Mercyhurst College for the Kindle. I have not read it yet but see that it’s a short book, less than 90 pages and retails for $4.99. Here is the Amazon connection to purchase it.